“We saw women rising from the ashes of their experiences to hold up the hands of women and girls left behind.” In one of the most turbulent years in history, women’s resilience prevailed. Against a rising wave of authoritarianism, amidst a global pandemic, and facing a climate crisis, women wielded their power on the streets, at the ballot box, and on World Pulse – reminding us that our sisterhood was made for moments like this. Read the 2020 Global Impact Review for highlights from a tumultuous year that gave rise to incredible leadership. 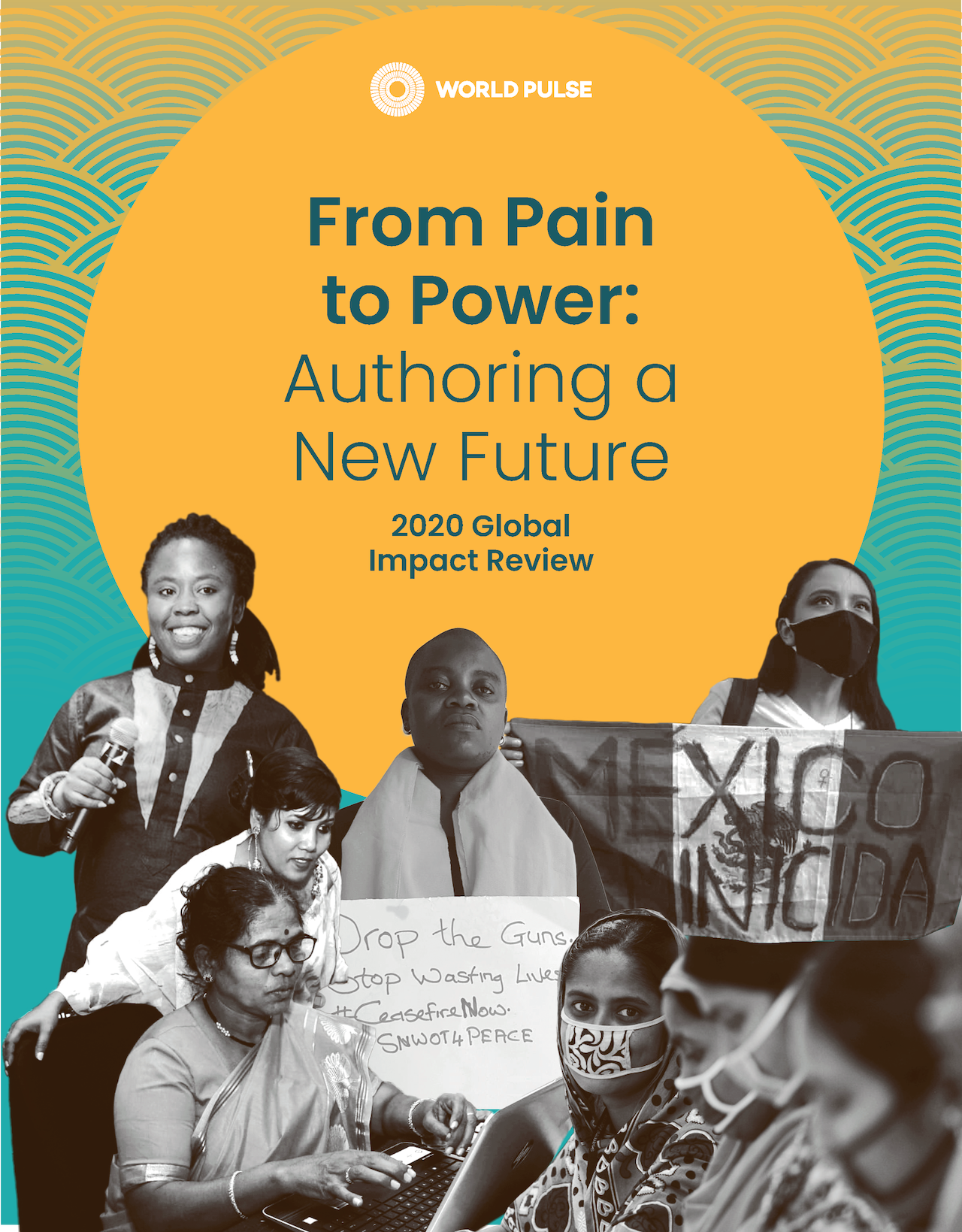 In 2020, the women across World Pulse’s global community were undeterred, connecting online to create a new future worldwide.

2020 brought devastating challenges that hit women and historically excluded people the hardest. But in this era of intensified division and isolation, the World Pulse community held each other on the front lines of crisis, reaching across borders and barriers to co-create the blueprint for a more just future. More than ever, women logged on to rise up together across 227 countries and territories – and in doing so, impacted millions around the globe.

As the world’s leading safe, supportive online community with a decade of experience connecting women worldwide for change, we know that the leadership of women is vital to building inclusive pathways in times of crisis.

Collaborating across borders and lifting each other up, World Pulse members are often doing more than their own governments: building food security and providing health care for their communities, standing up to warlords in conflict zones, building systems to end gender-based violence and white supremacy, educating girls in refugee camps, advocating in international forums for climate action and Indigenous rights, taking technology into their own hands to strengthen peace movements, and so much more.

Despite a year where women’s progress rolled back a generation - 79% of members surveyed reported that being a part of the World Pulse global network increased their resilience. In fact, 7 out of 10 members surveyed reported that because of their involvement with World Pulse they took action in their community, and impacted 4.2 million lives. What’s more, new member impact dashboards placed power in their own hands to put their impact initiatives and ambitions on the record - impacting 1.2M lives, with ambitions and plans to reach 85 million more.

The world needs women’s leadership. We are growing more leaders, faster: In 2020, our established online leadership pathways and programs supported women to learn in community, deepen digital organizing skills, exchange strategies for mobilizing their visions, and emerge as even more influential, transformative leaders on the front lines of our world’s most pressing issues.

The world needs to hear the voices of those most impacted. We are raising the volume. We deployed our unique crowdsourcing methodology to elevate their recommendations for a post-pandemic future through the Dispatches From the Pandemic report, to speaking out for a more just online world through the #SheTransformsTech campaign.

Gender justice movements need greater online collective power. We are linking them. As the global pandemic compounded into a mental health crisis that weighed heaviest on women, members reached across borders and language barriers with a critical lifeline through monthly Encourager Parties, our newly relaunched Mentorship Program, and community-led virtual calls.

Thanks to you, these are just a few of the ways World Pulse members managed to impact millions of lives in the midst of one of the most challenging years in living memory – proving that when we are connected, supported, and heard, women are an undeniable force for change. Read on to dig into World Pulse women’s stories, visions and transformative impact in 2020.

Learn more about how we are driving impact in and for our community.